We recently received these progress photos of the stage 1 build of a CBD80 replica model to operate on the Illawarra Steamers Club miniature (5″) railway in North Wollongong, NSW,  Australia.

John Wilson who sent the photos is a member of the Club and says that stage 2 will be the bogies and motors and stage 3 will be detailing and painting.

We look forward to following progress of the build and seeing it running on the track.

*Interesting fact, John is originally from Millom in Cumbria UK and immigrated to Australia in 1964 when he was 19. John makes everything from scratch (he doesn’t buy many parts)  and the loco is actually on top of a modified hospital bed! 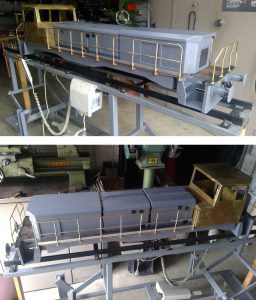